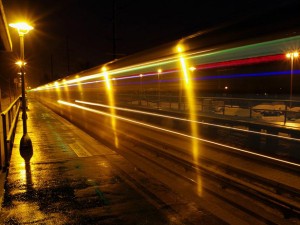 “Not another word. We have a contract and I don’t feel sympathetic tonight.”

The devil reclined in Mizuru’s office chair. She’d evacuated it as soon as he appeared, pressing herself against the window. The devil’s composition book materialized and he flipped through until reaching the desired page.

“Mizuru Baishun,” The devil read aloud while she cringed. “A managerial position at Mikakino Train Station in Kakamigahara, Gifu, Japan in exchange for her soul, slightly used. Signed, dated in blood, witnessed by her dog, Aoba.”

The book snapped shut and dissolved in red smoke. “If we’re adhering to total honesty, Ms. Baishun, ‘slightly used’ is a generous assessment of your soul.”

The devil leaned across Mizuru’s desk, inviting her to occupy the chair she reserved for guests. She sat slowly, shaking uncontrollably. He simply shrugged.

“Ms. Baishun, let‘s be realistic. We made a deal. A much fairer one than Faustian myth would admit, and my end was held up. I came to collect at what I thought would be a convenient time. You were leaving work and returning to a house empty of everything but an overweight Akita and photos of your ex-husband. Should I have shown up while you were showering?

“Yet you appear surprised, as if you’ve forgotten our agreement. I certainly didn’t forget. And while I’m impressed that you were stoic enough to not wet yourself, Ms. Baishun, we struck a deal, a bargain owing to your unlaundered soul. You rose from a pornographer who married her best customer to train station manager, the youngest in company history and the only woman. Everything I promised.” 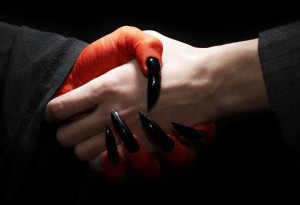 The devil got up and took Mizuru’s hand. She stood, too terrified to be defiant. As he led her away, she braved a final glance at the framed certificates, the carefully polished awards. Outside, the station was impossibly empty for Friday night. A numberless silver train car awaited them on the platform.

The devil slid open its door, but Mizuru hung back. “Please, Ms. Baishun,” He sighed and the composition book reappeared in his free hand. “Read your contract before impatience tempts me to indiscretion.”

She took the book and studied it carefully, occasionally consulting a small dictionary in her purse. The devil checked his watch with growing exasperation.

“Ms. Baishun, I realize English is not your first language but you’ve had plen-”. Mizuru suddenly flipped the contract around and pointed to a sentence stenciled near the bottom. The devil read it from above his sunglasses. 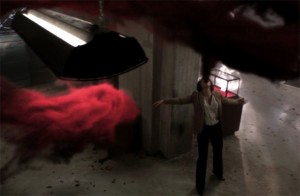 “In the event Mizuru Baishun can provide a soul of equal or greater purity than her own, that soul will be accepted as payment for the above services rendered.” The book puffed away once more and the devil couldn’t help but smile. “Such desperation, Ms. Baishun. All passengers were redirected from this station in anticipation of my arrival. The only soul within range of our agreement is yours.”

She shook her head and ran back inside the office. He trotted after her, and Mizuru nearly knocked him over on her way out, struggling with a large, cream-colored bundle. The devil’s lips twitched.

“You brought your dog to work?” Mizuru grinned and held Aoba aloft. The dog yawned in the devil’s face. “Who brings their dog to work?” He paced the station muttering, shaking his head, occasionally turning to look back at the woman and her pet. Mizuru waited. Eventually, the devil breathed deep, straightened his tie and accepted the animal. It gnawed on his watch.

The devil walked back to the train platform. He removed his sunglasses and held the dog’s face to his for a moment, then released it back onto the floor.

“I have my payment, Ms. Baishun. It seems a good dog has shown its breeding. Enjoy the rest of your life.” The devil stepped inside the train and it slid quietly out of the station. Mizuru gleefully watched it disappear, until Aoba brushed against her legs and the world promptly went dark.

The men who clean Mikakino Station’s floor every morning bring the policeman to the station master’s office door.

“Nobody went inside.” The other adds.

On the floor in front of the door is a single sheet of paper. The officer frowns back at the cleaners.

“Neither of us touched it.” They insist.

To whom it may concern,

Through events whose recollection would be complicated and unnecessary, I am currently the occupant of my dog’s body, unable to determine if this is a permanent situation. Regardless of this change, I will continue to uphold my position as station manager with a strong sense of responsibility, and the will of others pushing me to succeed. 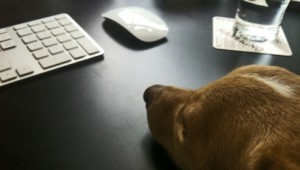 The officer drops the letter. “I don‘t have time to waste on pranks.”

“Neither do we!“ The cleaners demand.

“Maybe you ought to get back to work, then, before your boss ‘barks’ at you.”

And the policeman walks out. The puzzled cleaners watch him go, then slowly, valiantly open the office door. A heavy, panting dog sits on the desk, staring back at them. In its paw is a pen, and a second letter.