Arson With a Smile 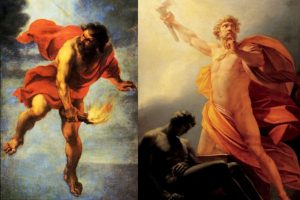 I keep a little sun in my pocket, a little
ball of warmth, a little light for days
stuck inside staring out the window
dripping with self-doubt and frustration
to burn a hole through the walls
melting shower curtains to run naked
into the fading rain, climb the red side
of a full rainbow stretching into black
holes waiting like a secret path
where gumdrop forests breed ruckuses
of dragons flapping wantonly
among the moss under ancient
trees sprouted from starlight borrowed
from the stash Prometheus stole
from the sun, hidden in pockets
he sewed himself onto his socks
where no god would think to look
so that even chained at the mercy
of eagles one glance down to his feet
ignited fireworks in his heart

An arsonist by trade, John Reinhart lives on a farmlette in Colorado with his wife and children. He is a Frequent Contributor at the Songs of Eretz and his chapbook, encircled, is available from Prolific Press. More of his work is available at http://www.patreon.com/johnreinhart

Greek mythology is full of beautiful stories: battles, heroes, spells, betrayals. Our culture has grown out of these legends. Like that of Prometheus, the rebellious Titan who stole fire and gave it to men and …