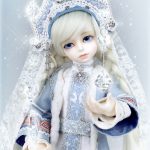 Published by Associate Editor on November 30, 2016. This item is listed in Issue 32, Issue 32 Stories, Short Stories

One sings the tale of Eisin, in her grave before her time
A grave made not of ash and earth, but hoarfrost and hard rime. 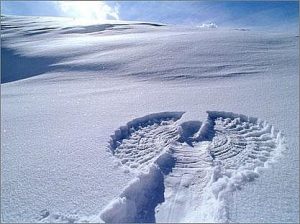 The tale they sing is false. It’s not the ice that holds the wench but the summer sun and the seaward breeze, and the love of a youngling fool.

I sing then the tale of the youngling fool, who fell in love with a maiden of ice and broke her heart thereby. I sing for her parents, the poor witless fools, I sing for the witch and her wretched assistance, I sing for the summer and sunshine and sweetness and I sing for the silence that follows a sigh.

I sing then this song.

Oldmother Taige and Oldfather Fallow had wished for a daughter a very long time. They had not always been old, but they had always been barren, and this was a source of marital strife. One could not even blame the other, for both were as sterile as swampwater boiled. Perhaps they went mad. Perhaps they were mad. For certain as summer, something had snapped.

This thing snapped in winter, as many a madness-related things do. The snows were thick and stuck like thistles, the wind was quiet and biding its time. Oldmother Taige and Oldfather Fallow scarce could open a window or door without a snowdrift drifting inside. With no way to leave and no one to visit, what else could they do but go out of their minds?

A daughter they fashioned from snowdrift and ice, a tiny thing first for she would melt and puddle into the earth. With perseverance (and madness— never doubt, this was madness) Oldmother and Old-father crafted themselves a lovely shining maiden.

By then the outside snows had melted and winter was merely a memory, but inside their home the winter remained.

Oldmother said, If we open the door, our daughter will melt.

Oldfather said, Then let us stay inside and die, so that our daughter may live. Is there a greater act of love than this?

And so Oldmother and Old-father stayed inside, growing weaker and weaker, their ice-daughter watching them with no eyes at all. They would have died, and should have died, but for the witch passing through the woods.

Most witches keep to themselves and their hovels, waiting for fools to come before them. This witch then was different, nosy and meddling, peddling her bargains at tuppence a head.

Misery and maledictions! came her cry to the winter-locked door:

The old couple heard this and made their lament:

The witch, she went to the door and knocked. Who asks mercy of a witch? she said. Who thinks they have the right?

No right, said Oldmother Taige, no right and no hope, but we are hopeless and have something to lose, and so we ask mercy, oh wisest of hags.

And what would you ask of me? said the witch, who knew better than to open the frost-rimed door. 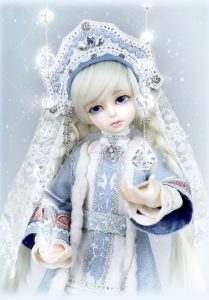 Save our daughter, said Oldfather Fallow. Give her our lives, that she may live.

And what do I get? said the witch.

Oldfather had no answer, but Oldmother said, Take our memories before we die. I’ll not have my daughter living with the shadow of our sadness over her well-sculpted head.

Done! said the witch, and in a trice the ice-girl breathed her first and her foolish parents breathed their last.

The witch swung open the cottage door and gestured grandly to the outside world. Your inheritance! she said, and buried the bodies and swept the floor and started a fire in the crusted old pit. The ice-girl never moved, never spoke, never saw. She lived, and that was all, and so the witch stayed in the old couple’s cottage and practiced her doings within.

From herself, the witch gave the girl the name Eisin and thereafter largely ignored her. The girl was a gift-grab but useless besides; her voice was most pleasant but her songs passing dull, her conversation was limited and her intellect null. Still, she inspired the travelling fools, and the witch continued making her bargains and trades.

At last came along the most foolish of our travellers, a young man so in love with the idea of love that his every breath was a sigh and every blink was a bow. When he saw the crystalline form of Eisin outside, glowing and radiant and casting dancing drops of sunlight over the woodland floor, his sweet young heart burst and broke and scattered itself.

I love you, he cried incautiously, and her first response was a smile. She would have smiled if he’d called her a dunce or a sluggard or a sloth, but he didn’t know it and that was that.

Did you hear me? he said when she did nothing but smile. I love you. Haven’t you any response?

Still she only smiled, and the witch stuck her meddling head out the window and called to our youngling fool:

Flittering and flattering,
Not a thing is mattering.
Run and dance and smile and sing,
But she cannot do everything.

I care not for what she cannot do, said our Young Mister Foolish.

You should, said the witch. You spoke of love, and Eisin here hasn’t a shred nor a morsel within the whole of her being.

Then Eisin spoke, and our boy’s heart shattered anew: What is it, to love?

Our young fool gathered her hands in his. Cold they were, and slick and yielding; she smiled at him and murmured nothing.

To love is to replace yourself with another, said our youth. It is to take them within yourself. One who loves has a blessed existence; one who loves may never die.

Eisin looked to the witch in the window, and the witch, she smiled too. May I have this love? asked Eisin.

Our boy, he answered for the witch: Take it, he said, there is nothing else worthwhile in life if one such as she cannot love.

And what do I get? asked the witch. If she is getting your love, which is the only worthwhile thing, then what dregs do you plan to throw to me?

Take the rest, our boy said wildly, all that remains of me after, whatever is left I leave for you.

Barely worthwhile, said the witch, but worth enough. All right then, keep holding her hands and enjoy the feeling while it lasts.

Melted! Ah yes, melted; how else should this story end? When Eisin loved, she became truly human, but a human heart’s too hot to hold a figure of ice and snow. She melted, did our Eisin, and her hands ran to water in our youngling’s foolish grasp. The drops of sunlight became drops of herself; the tears she cried were her eyes.

I love you, she told our witless hero, and in the next moment his ankles were damp with her self.

I’ve killed her, he said.

The wonderful part, said the witch, whose heart was a stone full of maggots and holes, is that she never would have died if you hadn’t told her to want something that was not hers by right. Tell me, is it better this way?

Our boy looked at the water seeping into the earth, steam rising from pockets and splotches and springs, cooling and misting in the hollows of tree trunks, fading and fleeting and gone.

She will return in the rain, said our boy. In the morning dews, in the winter snows, in the water we drink and the tears that we cry. She is larger than herself, as love is larger than self. And he himself fell dead at that, for his life was for love and his love had melted, scattered to summer and the seaward breeze.

Laura DeHaan
Laura DeHaan is a healthcare practitioner in Toronto. Her first novella, Becoming Beast, comes out in October 2016 with Grace&Victory Publications. You can find the lists of her other publications on her website I Am In Your Eyebrain, or follow her on Twitter @WritInRooster if you need to kill like five minutes of your day.