Sleeping through the End Days

Horsemen in black boots shine
against the dead streets, peering in each window,
smashing in every door. 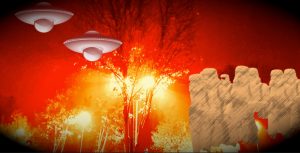 The house begins to smolder;
smoke like thick liquid rises silently and fast,
closing our ears with a flood of dark.

The yellowing stars go out
like theatergoers after a disturbing performance
stumbling in the aisles, whispering angrily.

Somnambulant, we lose our way
in baroque murals, trompe-l’oeil gardens,
a flaking fresco of falsehood and denial

whose far horizon holds an ancient ridge
of mountains, crumbling like a fossil spine.
We will cross them safely into another country.

— F.J. Bergmann
F.J. Bergmann edits poetry for Star*Line, the journal of the Science Fiction Poetry Association (sfpoetry.com) and Mobius: The Journal of Social Change (mobiusmagazine.com), and imagines tragedies on or near exoplanets. Her chapbook A Catalogue of the Further Suns recently won the Gold Line Press manuscript competition.

Editor’s Notes: From publicdomainpictures.net, the fiery “lord of darkness” is combined with saucers and stormtroopers. 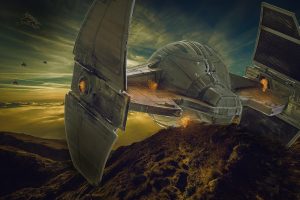 Wedged in the captain’s chair, our thighs pressed together, the scream of klaxons making my wife’s words impossible to hear (our lips move I love you I love you) the arm of the chair digging into my side, my hands clenched on the transmitter . . . – – – . . . SOS . . . – – – . . . her hands white-knuckled on the yoke, pulling, pulling. The crash is a tooth-jarring jolt, a sudden stop to flight, then smoke, darkness, more smoke. Two inter-solar spies climbing out of the twisted wreck, becoming like two women happy to be alive. Lucky, kissing her over and over, holding each other. Laughter. Breathable atmosphere, green mountains, white beaches, blue water. The information we stole from the enemy was still intact, encrypted under our SOS for Command to find us on this out-of-the-way paradise world, with trees like palms, heavy with something like coconuts, and a sea teaming with something like fish. My wife, restless, always building, salvaging, discussing enemy plans, until I wrap her hands in mine and tell her to look around us. For the first time in our marriage, danger is far away, life does not seem so short and desperate, and we are surrounded by peace and beauty. So we lay down our burdens of duty for a little while, eat charred flesh and lick the grease from our fingers, make love in the sand, and start to really know each other, waiting for a rescue neither of us is quite sure we want. When Command arrives to fly us back into war, my wife takes my shaking hands in hers and tells me as long as we remember to pause, and look around, we will always find this place together. And she is right.

Karen Bovenmyer earned an MFA in Creative Writing: Popular Fiction from the University of Southern Maine. She teaches and mentors students at Iowa State University and serves as the Assistant Editor of Escape Artists’ Mothership Zeta Magazine. She is the 2016 recipient of the Horror Writers Association Mary Wollstonecraft Shelley Scholarship and her poems have been nominated for the Science Fiction Poetry Association’s (SFPA) Dwarf Star (short form) and Rhysling (long form) awards. Her fiction and poetry appears in more than 40 publications and her first novel, Swift for the Sun, will be available from Dreamspinner Press on March 27, 2017. Her poems appear or are forthcoming in Abyss and Apex Magazine, Off the Coast: Maine’s International Poetry Journal, The Skinny Poetry Journal, Remixt Magazine, Strange Horizons Magazine, The Were-Traveler E-Zine, ZingaraPoet.com, as well as the SFPA’s Eye to the Telescope Magazine, Dwarf Stars and Rhysling Award anthologies, Amour: Love Poems Anthology, Corpse Roads Horror Poetry Anthology (Folk Horror Revival), My Cruel Invention: A Contmporary Poetry Anthology (Meerkat Press) and the Shortest Day, Longest Night Anthology (Arachne Press). She can be found on Facebook, LinkedIn, and Twitter through her website, http://karenbovenmyer.com/

Editor’s Notes: A spaceship (Pixabay 1839722_1280), crash landed on an alien world, creates that sense of desolation in this love prose poem. 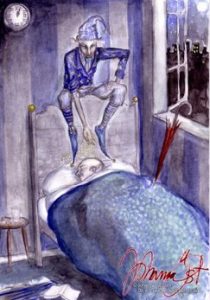