The Old Weaver wrapped the bright royal blue cloak around the prince as she did each night.  She began her story.

After seven months, the mistress called her, “I think you are ready.” 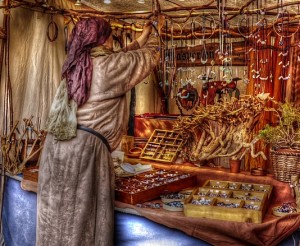 “I am! I’m ready to weave!” The girl gazed into her teacher’s face, the gray eyes framed by gray hair held by a sparkling hair comb.

“You’re ready to sell the cloth in the market. You’ve carried the basket and watched me.  Be sure to fetch a good price and bring back every coin.”

The girl folded the cloth and put it into the basket without saying anything. Her disappointment hung in the silence.

“Let me fasten your cloak, the forest is cold and wet.” murmured the old woman as she reached for the tie around the girl’s neck. 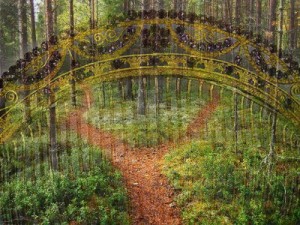 In her anger, the girl didn’t watch the forest. At midday, she sat on an old stump to eat her bread and cheese. She closed her eyes to savor the taste. She noticed something when she opened her eyes. Had it been there before? A spider web suspended between two trees was woven in an intricate design. When she examined it more carefully she saw a depiction of a hand mirror. She saw her own face reflected in the web.

She reached up to yank her hair, “I’m almost grown, going to market with raggedy hair. It should be put up with a comb. I work for crumbs.”

She threw her crust to the ground. When she arrived at the market in the Old City, it had never seemed more wondrous: stalls hung with shining pots, tinkling bells and golden baskets; every woman finely dressed with hair pinned by a comb. The cloth sold for a good price: five silver and seven copper coins. Before tying the purse shut, she saw the stall selling hair combs.

That old woman never gives me anything. I deserve something for my work. 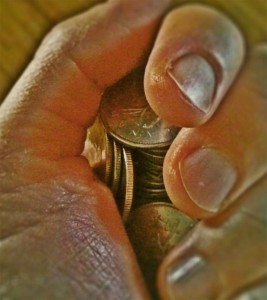 The girl asked the price of each comb. The most beautiful was identical to the one her old mistress wore except it was made of genuine silver with tiny rose pearls.  It would have cost every coin she had and she wasn’t willing to return empty-handed.  The least expensive was a copper comb set with three scraps of coral. The girl paid with three of the copper coins.  It wasn’t very pretty but she knew she deserved to have something for her trouble.

At the fountain in the center of the city, the girl washed her hands and face before arranging her hair with the new comb. The tiny red stones made her hazel eyes shimmer green.  Although not flattering, it had been the cheapest thing to buy. She tied up the rest of the coins and hurried through the forest. She stopped near the cottage.

My mistress will beat me if she finds out I stole from her. Why did I buy this stupid thing, I’ll never be able to wear it in front of her.  She threw the trinket on the ground.

The old woman looked disappointed after counting the coins, “I’d hoped for three more copper coins. I wanted to have enough to buy back the genuine silver comb my Old Mistress gave me. I wanted to give you this comb when I got my own back. You’re old enough to wear your hair tied back. I’ll give it to you now and braid my hair more tightly.  A few loose wisps can be expected on an old woman like me. Here, let me put this in your hair.”

The young girl worked harder in the months to come and never revealed her betrayal. She was cooperative when asked to sell another basket of cloth. 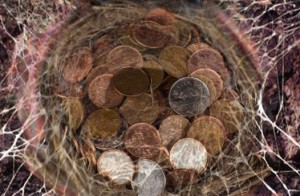 When she stopped at midday to eat she noticed the spider had made a new web.   The animal had used the coral comb in its design!

“Why do you have that comb? What have you woven now?  It almost looks like me!”

The girl noticed a crowd of snarling faces in the web. Her own face with scraggly hair and the copper comb was in the center of the design. The girl pulled the comb from her mistress out of her hair to use it to shred the spider’s web. The strands would not break and both combs became stuck in the web. As the girl struggled to free herself, she was covered in sticky adhesive.

“I wanted to sell my comb and buy back my mistress’ comb, you beast!” 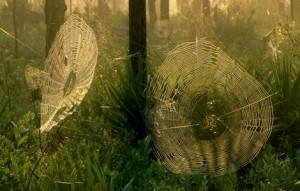 She couldn’t see the spider but she knew the old spinner had to be close.  The girl picked up the basket and ran to the river. She couldn’t wash the stickiness from her hands. In trying to dry herself she soiled the cloth she was supposed to sell in the market. She threw cloth and basket on the ground and ran to the city. What would she do now?

The girl listened to gossiping and sniping in the busy market place, she watched the cheating and stealing. The snarling dogs snatched scraps from each other.  When the comb-seller was distracted in an argument, the girl took the silver comb set with tiny pink pearls.  She ran home through the forest.

The old woman did not smile when she was given the comb and put it on the shelf. After serving the girl stew, the old woman went to bed. It was several weeks before another bolt of cloth was ready to be sold.

“Are you certain you can sell this at market child?” said the teacher.

“Of course, ‘mam, you can trust me. I got a fine price the last time, enough to buy back your silver comb. I don’t know why you won’t wear it.”

“Take the cloth if you want. I trust you.”

The girl convinced herself her teacher didn’t know the truth. She’ll never know that I stole that comb.

Walking the path, it seemed as if everyone in the forest knew. The trees glared, the birds criticized and even the rocks seemed disappointed in her. I wonder if I can skip lunch and walk straight to market if I’m fast enough.

The girl felt the familiar gnawing in her belly at midday. She stopped to sit on the same stump. If only the spider had not woven anything this time! The web was a rainbow that blocked the path to the city.  She could not pass and she knew she could not break the web. The design included strips from the cloth the girl had abandoned. Her eyes drank in every vivid detail until she saw tiny pearls in the corner.

“How could the spider have gotten the pearls from her comb? My teacher must be the spider! She’s the one spinning these webs all along. I have to tell her the truth!”

Before the girl could confess, the old woman silenced her with a gesture, “You have nothing to tell me, child. I am the oldest of the old and the wisest of the wise. You are one of many. When you saw vanity, you chose to be vain and stole to feed that vanity.  When you saw anger, you chose to be angry and stole to feed that anger. Now that you see goodness, you choose to be good. When you are older you may weave your own story.”

The old woman transformed into the spider and began to weave a web in the corner of the room.

Drifting into sleep, the prince couldn’t tell her what he was thinking, but it was your time, Old Weaver, and it will be my time.

AUTHOR BIO: Laura Beasley, the Mother who Tells Stories, has published seventeen short stories in fifteen different magazines. She has been married to her husband for thirty-five years and they are expecting their first grandchild this summer.