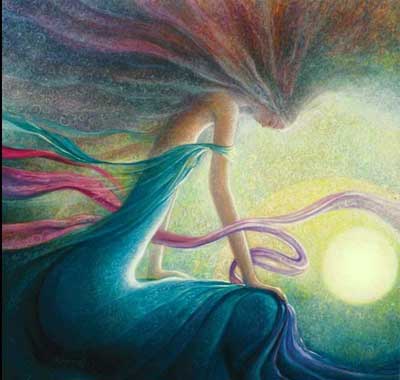 She sits on my bed as the evening grows dimmer
And my soul does her will,
And in the twilight, dream-still
Like wispy filaments, a bright pupil
Narrows, her senses sleepy but limber.

And at the bedside on the linen thread
The spiked tendrils of narcissus
Crackle, her hands stretch across this
Pillow, where dreams bloom off of her kiss
As sweet fragrance off a white garden bed.

Smiling, the moon woman dives into cloud-waves in the distance
And my blanched and suffering psyche
Fortifies itself anew in its fight with resistance. 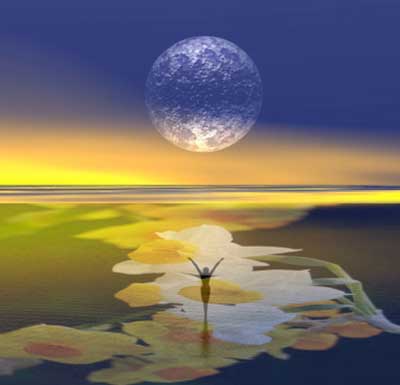 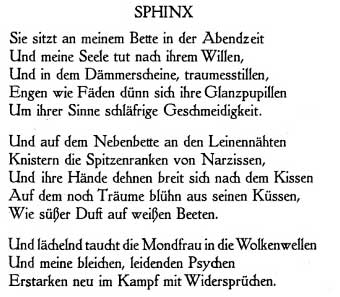 It rustles through our sleep 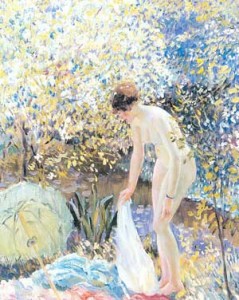 And I’m led homewards
On your breath, carried
Through enchanted tales
And sagas long-buried.

And my briar-smile plays
With your primal deep range
And all the earth comes
To nestle in around them.

It rustles through our sleep
Like silk, a delicate gust—
The world-old dream
Blessing both of us. 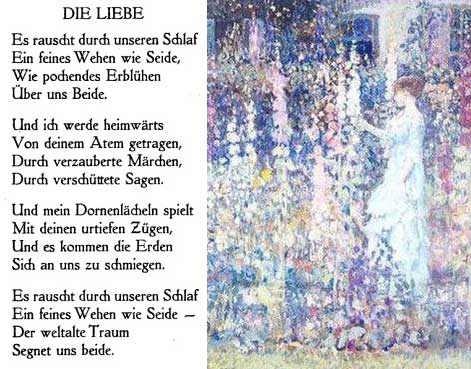 Published by Poetry Editor on August 22, 2015. This item is listed in Editorials, Issue 27, Issue 27 Poetry

A Casual Discussion on the Challenges of Poetry in Translation

This paper is not intended to be exhaustive, but aims to increase awareness of some of the challenges of translation, in general, but are amplified for poetry.

Though technically not a poem, Peter’s dream in the Acts of the Apostles (Acts 10: 10-16) is arguably poetic, and because of it being a dream sequence, it is speculative, as well. (I also chose it because I don’t have to worry about copyright.) A couple of the verses will serve to highlight some of the challenges in translation.

In translation of standard texts, much attention is paid to the mechanics of language, and rightfully so, but when that text is poetry, the poem is vulnerable to being robbed of its full meaning, or at least having it obfuscated.

I concur with Willis Barnstone in his 2001 essay, “An ABC of Translating Poetry” (http://www.poets.org/poetsorg/text/abc-translating-poetry). He says that translation is the art of revelation and that the art resides between the two tongues. I have always cautioned to be true to the language as much as possible, but that it’s far more important to be true to the poetic or emotional heart of the line. So in the strictest sense for me, speculative poetry in translation might be better called an exposition. But whatever you call the “translation,” understand that it is a new work.

When I teach about hermeneutics at a local college, I remind my students that a literal translation from one language to another is laughable to the linguist; there is no one-to-one mapping as there is for functions in mathematics. Function in language requires much more than translating words, especially if clarity and meaning is to be conveyed. It isn’t just the aggregate sum of the meanings of words to get the meaning of a line. (An easy example is the idiom or figure of speech: imagine a line in Spanish dialog, Vaya a freír los churros—which when spoken in Argentinian, this formal command, literally translated means You go fry churros! (a fried Spanish pastry akin to our funnel cakes), the problem is that this is an idiom meaning get lost or go jump in the lake.)

Therefore, repeating myself, the meaning of the line is not the aggregate sum of the meanings of the words. And for some languages, this is aggravated by other things. For example, in languages such as Hebrew, where each word may be loaded with rich images, many extra words in English might be necessary to convey that depth of meaning. Or in grammatically precise languages, such as Greek, the specificity and details would likely require additional words in English to tease out that importance from the weight of those words.

But in any case, when dealing with figures of speech and other idioms, as well as certain literary devices like synecdoche and metonymy (http://classroom.synonym.com/examples-metonymy-synecdoche-22055.html), it is essential that the translation reflects the correct interpretation of what the author had intended to the extent possible. These literary devices are ubiquitous in many languages, as well as in colloquial English. Classic and Koine Greek literature (from which the example below will serve to illustrate) are no exceptions.

In the case of tense, voice or mood, a correct translation might offer different options in English. For example, in Greek, the present active indicative form of, say, “I run,” could legitimately be translated as “I am running.” So which should one use? The one that promotes the best overall sense in context AND, for poetry, that which sounds the best to the ear together with the other words. However, in some cases, the original text might use a present tense verb, but in context might be past tense. (I’m not sure why.) Perhaps their linguistic style of speaking allowed for that, but in English, it could sound awkward. In English, the choice might be based on flow and clarity as well as sound—indeed the choice could be better in past tense than in the literal present tense. For example, in the Greek example below, θεωρεῖ is actually he is beholding, but the translators chose to use he saw because the clause immediately before it, ἐπέπεσεν ἐπ᾽ αὐτὸν ἔκστασις, is in the past tense—upon him fell ecstasy (which could be rendered, he dreamt). Therefore, the temporal sense of the passage would support past tense; i.e., the reader is immersed into the past so that the unfolding of the event seems to be in his present.

The semantic range of meaning of a word is very important, and it does change historically. Also, the modern day vernacular will likely be different (viz. Shakespearean English vs. Modern English). This too should be considered—today, saying quadrupeds might be awkward in conversation unless in technical discussions; animals would be an appropriate equivalent today (though clearly not synonymous).

Finally, syntax, and in particular, word order and punctuation, is something that might have to be altered to facilitate a smooth and sensible translation. In  English, we often place the subject, followed by the verb and then the object in a clause or sentence, but in Greek, the word order might be quite different and variable because the first words usually carry more weight than the following words. In Spanish, the adjective typically follows the noun, but in English it precedes it. And sometimes there are forms that don’t exist in English, like the particles, which are often untranslatable. Greek and Hebrew have them. For example, in Hebrew, there might be a difference between ha adam (adam or mankind) and eth ha adam (a specific man). The particle eth is untranslatable, but the article ha (the) is emphasized by the particle. Imagine an exclamation point after the article. Also, there is a construction called the noun-verb in Hebrew (nouns are generally correlated to verbs by their shared roots); that construction simply doesn’t exist in English despite the fact that there are some cognates because of the Latin influence.

Speaking of articles, the Romance languages, as well as Greek and others, are “always” specified in their writings, however, it doesn’t mean that they are always supposed to be translated in English. When translating text that contains articles, care must be taken, especially in poetry, to elide them unless the article is important for clarity and/or rhythm.

Let’s now consider an excerpt in Acts 10 (beginning with the end of verse 10 and going through verse 12). The Greek is from the Textus Receptus (from which the KJV is based):

upon him fell ecstasy and he is beholding the heaven having been opened-up and descending on him a certain vessel as a great sheet, having been bound to four corners being let down to its earth, in which was every kind of quadruped of the land and the wild beasts and the creeping things and the birds of the air.

For comparison, here is the translation according to the KJV:

he fell into a trance, And saw heaven opened, and a certain vessel descending unto him, as it had been a great sheet knit at the four corners, and let down to the earth. Wherein were all manner of fourfooted beasts of the earth, and wild beasts, and creeping things, and fowls of the air.

In my modern translation, which takes some liberty with syntax (for clarity and flow), I consider the synedoche in the Greek text, which is unraveled to render the word “vessel” for what it really is. The Greek word σκεῦός, transliterated skeuos, typically means vessel (to contain liquid), or implement, or an object. But it could also mean tackle, as in the ship’s rigging, which I believe to be the case here. It is interesting to note that the etymology of the word ship can be traced to this Greek root via skiff. My translation is arguably correct because it seems to be true to the author’s intent first, and to language second:

He became entranced and saw the heavens open, as well as the tackle and ropes of a certain ship descending toward him as a great sail—its four corners having been bound—letting down to earth in which was every kind of animal of the land, including the wild beasts and lizards, and the birds of the sky.

Compare this to the usual rendering, which is truer to language than to the author’s intent, revealing an odd image: a bunch of animals inside a sheet descending from heaven. The rendering I have chosen is truer to the author’s intent than to the literal language. It reveals a clearer image: a large sailing ship full of animals. This adds significant subtext to the passage because of the allusion to Noah’s ark, and the symbolic significance of that ship with respect to salvation being extended to all mankind, beyond the Adamic race—not just the Jew, but also the gentile. I do not wish to wax theological here, but simply want to point out that the depth of meaning can only be approached with attention to the complexities of language and the realization of its nonlinear translation.

Here’s an attempt to render this excerpt into a poem by lineating the prose:

He became entranced
and saw the heavens open,
as well as tackle and ropes of a certain ship
descending toward him as a great sail
—its four corners having been bound—
letting down to earth
in which was every kind of animal of the land,
including the wild beasts and lizards,
and the birds of the sky.

However, literary depth is missing. These verses can be lifted into poetry by subtext and with allusions to Noah’s ark and what happened there (Genesis 8:11). But that pushes the work beyond translation, perhaps even beyond exposition; nevertheless, it shows how a poem can be inspired by translation. I close this discussion with such an example:

Entranced, he saw heaven
open, and the ropes and tackle
of a large sail ship.

It descended toward him, its great sail
fastened against the wind
drifting down to earth.

Inside its gunwales, there was
every kind of animal imaginable
in the land: wild beasts and lizards,

and the all birds of the sky,
and the one from heaven
singing with an olive branch
in its beak.