Published by Karl Rademacher on February 10, 2014. This item is listed in Issue 21, Serial Novellas 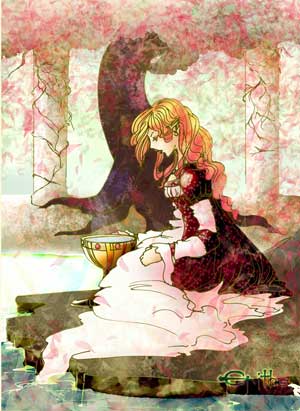 A story of the adventures of Prince Kamar al-Zamán and Princess Budur, as told in the “Tale of Kamar Al-Zamán” in A Thousand Nights And A Night; translated from the original Arabic by Sir Richard Burton.

Condensed and retold by Joseph Green

My son,” said King Shahrimán, “this morning I felt a flutter in my chest, and fear it was from the wings of the angel of death.  I worry that my time draws near.  You are nineteen, and my only child.  I command that you marry without further excuses or delays, and provide me with grandsons.  I have a suitable princess in mind.”

King Shahrimán ruled the Khálidán Islands, in the sea near Persia, from his capital city of Unayzah.  He had reached his middle years without heir, and it was a matter of great rejoicing when his first wife at last presented him with a beautiful boy.

The king had summoned Prince Kamar to his breakfast room and invited him to sit and eat, but Kamar had declined.  He did not believe the king, though elderly, was anything less than perfectly healthy.  And he had been expecting this command. 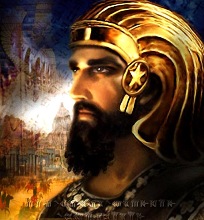 “Honored father, I gladly obey you in all things, save this one.  I have studied this subject in many books, and learned that most of the misery accorded to men results from their entanglements with women; in particular, wives.  Their artifices are endless, their intentions perfidious and foul.  I will content myself with concubines, and never take a wife.”

King Shahrimán had provided his son with the best tutors and arms-masters, watching over his growth and development with close attention.  Kamar dutifully practiced with sword, horse and lance, but his heart had become enslaved to a love of books and knowledge.  He fancied himself better educated than even his father, and the wazirs and emirs who served him.

King Shahrimán recognized his beloved son’s stubbornness as youthful folly, likely to be cured by time.  But he could not brook such open defiance.  The king ordered his Mameluke guards to confine the young prince in an abandoned citadel in the oldest part of Unayzah, until such time as he should reconsider his decision.

Unknown to the king, a dry well in the courtyard of the old citadel led to the underground hall of Princess Maymúnah, daughter to King Al-Dimiryát of the fiery Ifrit tribe, the powerful ruler of Arabian Jinn.  Maymúnah rose through the well at midnight as was her custom, ready to fly upward and immerse herself in the light of the stars.  But the bright moonlight revealed something unusual, a palace guard, wrapped in a cloak, lying asleep outside the iron-bound door to the tower. Then she noted light leaking past an edge of the door.  Curious, in the way of Jinn, she flew up to an opening high in the tower and looked inside.  Seeing a sleeping man on a newly installed couch, with lantern and candle burning at either end, she descended to the floor, folded her large wings, and approached him. 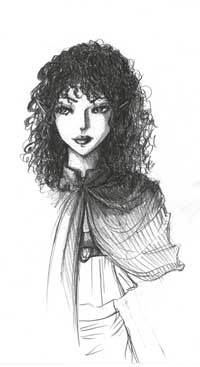 Princess Maymúnah was young, in Jinn years, and beautiful.  She stood twice the height of a human woman, with long hair black as night and lustrous coal-dark eyes, red fire glowing in their pupils.  Maymúnah wore harem silks that partially revealed the ebony loveliness of her slim form, so divinely made that all male Jinn she met lusted after her.  She had spurned every suitor, preferring the freedom and privileges of a king’s daughter.  When Maymúnah felt a need for the pleasures of congress, she assumed the form of a Nubian slave girl and enticed some handsome young soldier or merchant to her bed.

But Maymúnah was not prepared for the beauty of the young face lying on a pillow above the damask coverlet.  Prince Kamar had cheeks of rosy red, eye-brows arched like bows, and a wide and noble brow.  Intrigued, Maymúnah carefully drew back the cover, revealing a body, clad only in a thin sleeping shift, somewhat short in stature, but strong and perfect in form.

Seeing him thus, Maymúnah felt a stirring in her loins, a strong desire to change into her Nubian form; let this beautiful young man awake to find himself gripped in her strong arms.

But Maymúnah resisted the temptation.  She was of the Jinn who believe, and rested her faith in Allah.  Good conduct would be rewarded, and bad bring misfortune.  Maymúnah knew by his beauty that this must be the lone child of King Shahrimán, imprisoned here for some unknown offense.  She covered the sleeping youth again, resolving to keep him safe from harm, including the allurement of her own fiery embrace.

Maymúnah flew up and out of the tower, resuming her nightly journey to the lowest firmament of heaven.  But she had scarcely begun her usual sojourn there when she saw below her another Jinni, a young Ifrit named Dahnash.  Angered at being disturbed in her solitude, she swooped down toward him like a hawk on a pigeon.  But Dahnash saw her coming, and fearing her might, cried aloud, “I beg you, princess, harm me not!  And in return for your forbearance, I will tell you of a wondrous thing I have seen this night.”

Having already seen one wonder, Maymúnah was interested, and let Dahnash speak.  “Know you that two hours ago I visited the city of King Ghayur, Lord of the Seven Islands.  I found his daughter Budur, reputed the most beautiful maiden in all of Arabia, sleeping locked in a tower room.  It seems her father had determined to make alliance with a neighboring king by marrying Budur to his son, but she refused his command.  The princess said she would anchor a sword in the ground and fall on it before marrying a man she did not love.  The king took away her privileges and imprisoned her high in the tower, to reconsider her decision.”

Seeing that he had captured Maymúnah’s attention, Dahnash went on, “For a full hour I gazed upon her as she slept, enraptured.  I was tempted to steal her away and make her my own wife, but our king has decreed that any who take human companions without their consent shall be put to death.  Budur is without doubt the most beautiful human who sleeps on the Earth this night.  I love her dearly, and have made it my mission to keep her from harm.” 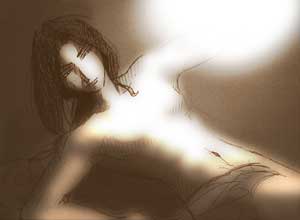 “You are wrong!” cried Maymúnah. “I have just seen a young man of incomparable beauty in the city below.  Your princess can be but a shadow in the mist compared to him.”

“It cannot be so,” said Dahnash.  “Come with me, feast your eyes on the beauty of Princess Budur, and you will change your opinion.”

“Nay, you shall come with me instead,” said Maymúnah.  She ordered Dahnash to descend with her to the ruined tower, where they entered through the high opening in the wall.  After gazing at the sleeping youth for a time, they flew outside again and into the sky.

“He is indeed a comely youth, my princess,” said Dahnash.  “But still . . . Allah has decreed that true loveliness resides in the female form, and men cannot compare.”

“What nonsense!” said Maymúnah.  “To the female eye, men are more beautiful by far.  But I am willing to gaze on this young woman you think outshines my sleeping prince.”

Flying by magic rather than their wings, Maymúnah accompanied Dahnash to the tower where King Ghayur had confined his daughter.  The night was warm, and Princess Budur slept under only a cotton sheet, her maid Ayesha asleep on a narrow bed nearby.  After gazing for long on her beauty, Maymúnah whispered to Dahnash that Budur was indeed a flower of feminine perfection, but still no match for Prince Kamar.  Dahnash stubbornly disagreed.

“There is a way to settle this,” said the Ifrit princess.  “Bring her, and we shall lay them side by side and compare.”

Dahnash laid a spell of deep sleep on both women, then lifted Budur in his arms.  They traveled quickly back to Kamar’s tower, where Maymúnah placed the prince under the same sleep spell before Dahnash pulled back the cover and laid Budur beside him.  She was an unusually tall woman, and the two were almost of a height.  The princess too slept in a simple shift, which revealed as much as it concealed of her young but fully-developed form.