Listen…you can hear the ancient breath

of nine billion souls exhaled upon the wind…

these hums of constellations tell their tale. 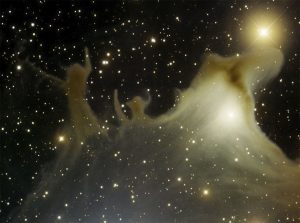 See the emperor, the water bearer and the warrior,

spiraling the spoked wheel of the cosmos again.

It is a sorrow-song; nothing but lost mythologies—

cartographies plotted in the faint pulse of electrons.

Far away somewhere there’s the echo: an old tune

being sung in someone’s bright and golden hall:

Weep not for the darkness

but only for that darkness

of a planet which will

Editors Notes: The Latin title translates I too lived in Arcadia, which in the context of the poem, is a warning.

The Ghost of the Cepheus Flare (similar to the Astronomy Picture of the Day, Oct 31, 2011: “Spooky shapes seem to haunt this starry expanse, drifting through the night in the royal constellation Cepheus. Of course, the shapes are cosmic dust clouds faintly visible in dimly reflected starlight. Far from your own neighborhood on planet Earth, they lurk at the edge of the Cepheus Flare molecular cloud complex some 1,200 light-years away. Over 2 light-years across the ghostly nebula and relatively isolated Bok globule, also known as vdB 141 or Sh2-136, is near the center of the field. The core of the dark cloud on the right is collapsing and is likely a binary star system in the early stages of formation. Even so, if the spooky shapes could talk, they might well wish you a happy Halloween.”)

But a similar image is used here, a perfect celestial image to complement this poem. Its eerie effect with the greenish rendition (National Optical Astronomy Observatory)—Ghost Nebula, vdB 141: “This image was obtained with the wide-field view of the Mosaic Camera on the Mayall 4-meter telescope at Kitt Peak National Observatory. vdB 141 is a reflection nebula located in the constellation Cepheus. Sometimes referred to as the ghost nebula, its awkward name is its catalog number in Sidney van den Bergh’s catalog of reflection nebulae, published in 1966. Several stars are embedded in the nebula. Their light gives it a ghoulish brown color. North is down and East is to the right. Imaged August 28, 2009.” (Credit: T.A. Rector/University of Alaska Anchorage, H. Schweiker/WIYN and NOAO/AURA/NSF)