In The Museum of Lost Sounds 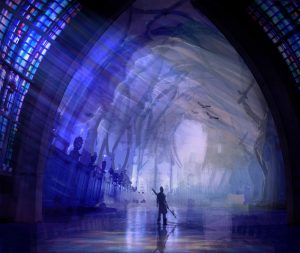 First there’s the drone of a foghorn;
the clumsy ship lumbers back
down the harbor, leaving you here.
Then the familiar suck
of clinging waves, the bray
of gulls; obscene, realistic,
as if there were fish bones to pick clean.

Your group laughs gaily;
you’re a merry troupe.
Your heels clip on polished tiles
as you go in, clutching stamped tickets.
It’s all very detailed.

In the hall of echoes,
protective coats removed,
you approach the first exhibit, listen
to the throating croak of toads;
their warning lost in translation;
the tisking chide and click
of delicate wings, the silky sift
of April rain falling in Kyoto.

You hear each acute drop as it soaks
the cherry blossom. Its branches rattle,
absorb the low thunder
of the bomb as it first drops
two hundred miles away—
the quiver

of a single blade of grass
to which the ant clings as it rocks
back and forth, back
and forth; the spider swings
precariously in its web. The mist
of toxin has a tiny sound, too.
The web vibrates.
No one smiles.
No matter.

Move on to a bloated bee,
velveted in petals, humming,
pollenating the curled sickly stamen
(remember the bees?)
Exhibit C’s an asphalt playground.
The little children run outside, even
at noon. There’s a silver-sounding bell
far away in the Himalayas. The scrape
of small skates on a lake.

Something falls away.
No matter.

Your group moves readily on
to the hiss of biscuits and
good country bacon frying;
the ache of a robin’s early song.
Rock and roll, artillery fire, prayers.

Still, there is the gnaw of old memory
as you near the exit. There is the exit.
Perhaps it’s just a dull whisper
in your head…but…
the faintest memory, when you

enter evergreen. The end
of snow. Trickling, the sap-drunk
bark and needle pop.
That white bear, laughably small,
(ridiculously small), sliding into the sea
then oddly, probably unrelated,
as you leave, you remember

a particular hot June day
on some wave-crashed beach of your youth;
that one very serious teenaged guard
explaining how most things actually
make no sound at all
as they drown.

Editor’s notes: The poem itself is a successful experiment in sound. The image, “Hall of Echoes” (by Matt Forsythe), is card art for the Forgotten Myths game