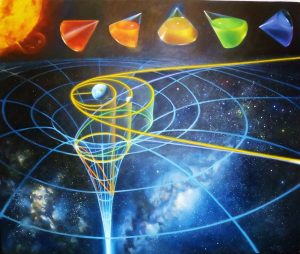 You think you had a bad day:
I hit the wrong key, wiped out
Three finished star systems,
A single hyperbolic orbit that I had worked on
For the better part of an hour,
And one sentient species. In this
Quadrant, that sets Creation back
An entire day, and all the texts
Will have to be changed to read
That rest had to wait
For the Eighth day. There was
Quite a to-do, and I thought for a while

I might be let go.
But in the end, I got some office tape
And penned a sign that reads
“Not until the Big Guy says so,”
And covered the button all the way
Around. Of course
The overtime I worked
To get new stars and planets and
And a substitute evolvable species set up
Was all off the books,
But it was a close one:

I thought I would be kicked back
To polishing haloes, feathering wings,
Encouraging unicellular organisms.

No one wants to lose a job
On the front lines like this:
I have so many creatures yet
To test out, so many plans
To put to the Boss. One
Miss-pressed key and my dreams
Shrink up like they were knocked free-fall
Into a gravity well. But,
With management’s reputation for Forgiveness,
And my skill at looking uncommonly repentant,

I’m back again to smoothing the residual anger out
Of crisp, new planetary systems, fixing the drive
In custom made dominant species.
Soon, I’ll have another fresh hyperbolic
Orbit running about in my imagination, bound
With the warmest celestial mathematics
And surfaced like wickedly loose light—
And with this one, I could just get an approval
For the angels of calculus that might divinely support it.

Ken Poyner’s latest collection of short, wiry fiction, Constant Animals, and his latest collections of poetry—Victims of a Failed Civics and The Book of Robot—-can be obtained from Barking Moose Press at www.barkingmoosepress.com, or www.amazon.com, or Sundial Books at www.sundialbooks.net. He often serves as strange, bewildering eye-candy at his wife’s power lifting affairs. His poetry of late has been sunning in Analog, Asimov’s, Poet Lore, The Kentucky Review; and his fiction has yowled in Spank the Carp, Red Truck, Café Irreal, Bellows American Review. www.kpoyner.com.

Editor’s Notes: Artwork is an oil painting by Sascha Grusche (Creative Commons Attribution-Share Alike 3.0) of conic sections, which describe possible orbits/trajectories of small objects around the Earth. A projection of these orbits (yellow) onto the gravitational potential (blue) of the Earth makes it possible to determine the orbital energy at each point in space. Isaac Newton, who proved that orbits were conic sections, is shown next to the Milky Way, our galaxy. The spectral colors symbolize different energy values, in analogy to the frequencies of light.