‘It will be as if, in the place of the stars, I had given you a great
number of little bells that knew how to laugh . . . I, too, shall
look at the stars. All the stars will be wells with a rusty pulley.
All the stars will pour out fresh water for me to drink . . . What
makes the desert beautiful,’ said the little prince, ‘is that
somewhere it hides a well . . .’ 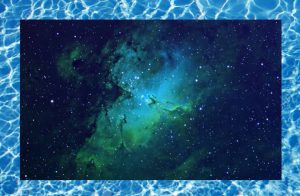 Every day I try to speak. I used to know
How to move lips and gums and teeth, tongue striking hard
To shape a sentence—or a smile. Signs recognized,
Though wordless, fail me too: I think I dream, sometimes,
By the window, watching cars, waiting, willing you home.
You don’t notice the longing in my eyes—green
Like the sea, the green you drank deep
Each time we stayed at the old house by the lake,
Pumping the well first thing every morning,
Black iron handle giving a sharp creak. The last time
We tasted that mossy, stone-soaked water, you fell asleep
Reading, dreaming in the sun. Pyewacket slipped her leash,
Ran down the beach, paws taking in tiny stones,
Siamese fur a blur at dusk, eyes gleaming bright
Green like the lights across the shore. Time was
We’d sit on the green bench all night, heads
On each other’s shoulders, watching stars,
Glassy-eyed Pyewacket winking as she purred
her own rumbling rhythm on our laps.

That evening she ran free, she never came home.
She had slept with me since a kitten, so familiar, yet
She’d come to me a mystery; tamed me with feline magic,
Her chirps a witch’s charms that only I understood.
When you woke up, I was out walking, and you crawled,
Frantic, calling, under the house, your trousers muddy,
Your lime shirt sprinkled with cobwebs. She wasn’t trapped
Under the boat. She didn’t bob against the dock,
Caught in your fishing lines like a magical carp.
She was gone, her vanishing act as mysterious
As her arrival. I cried bitter water.
Two days later, I went rowing without you
Around the dangerous bluff, missing her,
Blaming you. The currents tore an oar away.
Waves smashed a log into the boat.
I love the water but never learned to swim.
Drowning, I looked up toward heaven, the deep
Green weeds tangling my feet, green water rippling overhead,
Green leaves framing a sky so far away. At least the stars
Twinkled to me, purring with furry light, while I lay waiting
In a deep as dark as sleep, listening to their voices
Singing like tiny Siamese meows,
Enraptured, snared by dreams, drinking our story.

Now I sit curled beside your feet,
Struggling to say your name. You read my
Anxious look as a cat’s plea for affection.
We talk of nothing, but share a bed
As warm, as close, as lonely as before.

With a master’s in English literature, Adele Gardner has twice won third place in the Rhysling Awards of the Science Fiction Poetry Association. Her publications include a poetry collection (Dreaming of Days in Astophel) as well as 225 poems and 40 stories in venues such as Legends of the Pendragon, The Doom of Camelot, Strange Horizons, American Arts Quarterly, Silver Blade, Daily Science Fiction, and more. Two stories and a poem earned honorable mention in The Year’s Best Fantasy and Horror. Adele also serves as literary executor for her father and mentor, Delbert R. Gardner.  Learn more at www.gardnercastle.com.

Everything and I by Adele Gardner

My everything and I, on inline skates, glided black tarmac in our quest for frogs, deep bellows in the night, counterpoint to the zapping hum of power towers, derricks strung with lines like cables for suspended bridges. These monoliths perched like robots from another world where insect life held sway, marching in precision through the clear-cut behind the housing tract, immense in the swath plowed through lush wilderness, their height rising above the treetops to speak volumes into space.

We stopped there, past the last dark road, beyond the wood, the gingerbread cottages, the tall white mansions whose lanterns burned all night. As we passed, the last frogs trumpeted their gruff farewell, reminding us that fairy tales often don’t end well.

My everything and I had found the key, we thought, to life beyond the gap, a breathing space beyond the simple fact that low-wage jobs scarce covered our existence even without the alcohol that fueled his poet’s soul and turned me into something from the sky. I never felt at home when he, so starry-eyed, proclaimed me so high above him I knew it was not me he saw, but some magic mirror reflecting his own desires.

Blocked out, I hid behind the dark back of that mirror while he hovered above me, my angel, his radiant face blurred by the nimbus, that ghost-light, of all he saw and heard that I could not. The mirror hid his soul from me while he moaned my praises. My gaze reflected inward painfully to find only dirt and the little worms that had consumed me all along.

But afterward, gliding hand in hand on skates, the black night turned velvet ribbon beneath our feet, our words bounced back from porch-light to streetlamp, zooming as we rounded curves or whispering as we coasted, listening for frogs, attending the hush, our minds keen for secrets we could share.

We’d end up there eventually, no matter which road we took–the clear-cut where the towers marched, titanium thrumming with codes that regulated human life, these mighty multiple arms stretched cruciform above spider’s legs, humming to join the universe just beyond–those stars we couldn’t see, blocked by the reflective shield of light the city made, that dome of brightness powered by these lines of force, the pillars of our community.

We held hands, yearning for the stars we were blind to, feeling their dim pulse in the blood that beat through the fragile skin around the fingers we clasped near—held back by the delicate membrane that kept us from getting any closer, knowing only that someone else was there. Yet as the wind lifted our hair, we felt it through our bones, that hum that fueled the towers that linked us to the stars; and everything was close, so close, so near.

AUTHOR BIO: Adele Gardner is an active member of SFWA and a Clarion West graduate with stories published in Daily Science Fiction, Penumbra, Legends of the Pendragon, and Scheherazade’s Façade, among others, mostly under her previous byline, Lyn C. A. Gardner. She’s had poetry published in Silver Blade, Liquid Imagination, Strange Horizons, New Myths, Heroic Fantasy Quarterly, and Dreams and Nightmares, and forthcoming in Ad Astra.  Two stories and a poem earned honorable mention in The Year’s Best Fantasy and Horror (ed. Ellen Datlow and Terri Windling, St. Martin’s Press), and two of poems, one long and one short, won third place in the Rhysling Awards.